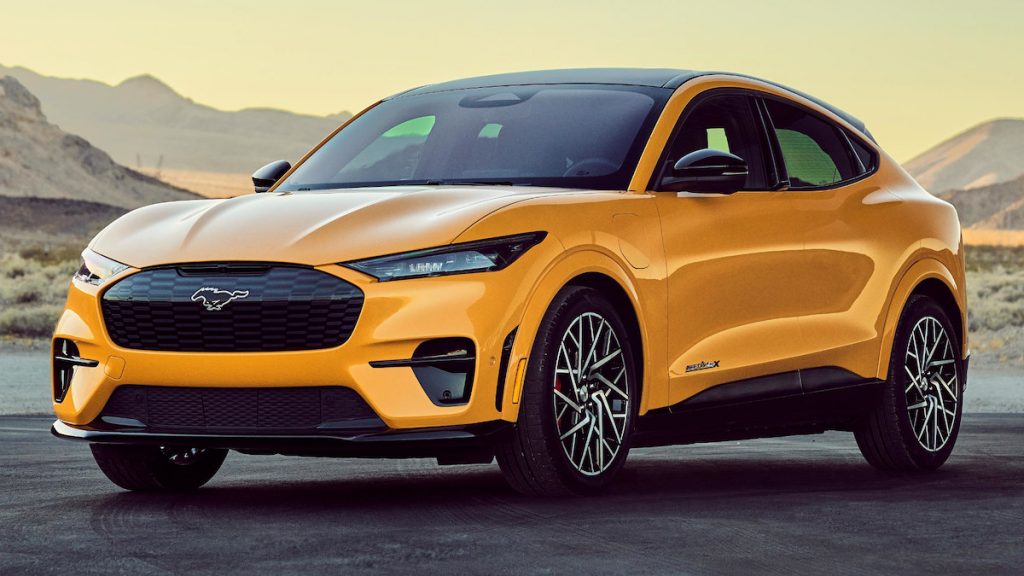 Ford Mustang Mach E: What to Expect from This New EV

“Explosive” — it’s how the media describes the growth of electric cars in the market. Sales of electric vehicles (EV) have risen by 40 percent year-over-year. Investors have poured $2 billion in EV startups. And automakers now offer some type of EV in their production, giving Tesla a run for its money.

One of those automakers is Ford, with its Mustang Mach E.

A New Kind of Mustang

When it comes to sports cars, the Ford Mustang is one of the most popular fast rides on the open road. It’s such a scene-stealer that it’s the second most stolen vehicle (the first being the Chevrolet Camaro) in America.

When it first came into the market, the first-generation Mustang became a beloved muscle car. Its eye-catching colors and many iterations, from The Shelbys and Machs to the Bosses and Es.

The Mustang E (a not-so fast car) was developed in response to buyers looking for fuel-efficient rides whereas the Mach 1 was designed with NASCAR-like hood lock pin. The brand-new Mustang may seem like it’s a combination of both models, engineering the efficiency of one with the velocity of the other. But Ford’s new electric vehicle is not a Mustang under the hood; this electric Mustang is a crossover.

Although no mechanical relation can be connected to its namesake, the Mach E does carry Mustang’s iconic design and recognizable feel; it’s one good-looking electric car.

So what is it really, this Ford Mustang EV?

Ford Mustang Mach E: Inside and Out

Inside, the crossover EV has:

Cargo space is also sufficient for those long road trips that require more than your usual travel baggage and enough storage for your accoutrements, from chargers to sunglasses.

The inside of your car and whether it’s got enough cupholders doesn’t really excite you. If you’re buying with your passengers in maybe, those may matter a lot. But if it’s just up to you, you’re probably wondering: how fast is the Ford Mustang Mach E?

Speed has been a roadblock for many buyers on the fence about electric cars.

With its engineered makeup, the Ford Mustang Mach E can go 247 miles (EPA-estimated with rear-wheel drive); hit 0-60 in 5.2 seconds at 260 horsepower. If 266 seems like dawdling speed, the latest iteration to the Mustang Mach comes in different models.

For superior performance and speed, look into the 2021 Ford Mustang Mach-E GT. The GT features 480 horsepower with an EPA-estimated range of 270 miles and go 0-60 in 3.8 seconds.

Although Ford’s Machs may not have the tremendous acceleration of a Tesla Roadster (which can go 0-60 in 1.8 seconds at 250 miles), it’s still a worthy purchase if you’re looking to switch from a gas guzzler to an EV. Since the market has opened up to a growing number of eco-conscious buyers, automakers like Ford have expanded their lineup to develop more EVs.

Aside from the Mach E, the F-Series also includes an electric powered vehicle: the Ford F-150 Lightning. The Ford Lightning is designed for people who want the toughness and readiness of a pickup with the zero-emissions of any EV. The automaker also developed EVs for the Ford Focus, the second electric car it produced behind the Ranger, which met its “demise” after four years in production.

But with advancements in auto technology, Ford has rebounded with its EV program through the Mach. Reception has been favorable; so much so that you may have to wait a while for your Ford Mustang Mach E.

How Long is the Wait for a Mustang Mach E?

The wait for a Mustang Mach E depends on the model you’ve chosen.

The 20-week wait applies only to the Ford Mustang Mach E California Route 1 and Select. The Select is the entry-level Mach E. The cost of this Ford Mustang Mach E is $43,895. Although the power and handling for Select and the California Route 1 are the same, at 5.8 seconds, 70 kWh usable energy for its battery system and 266 HP, the Route 1 is pricier. It will cost $52,775.

But what about the top level Mach E? How long would you have to wait to get your hands on the GT?

The wait is, at least, 28 weeks for a Ford Mustang Mach E GT.

Why the long wait?

All across the globe, semiconductor chip shortages are hampering production. So Ford has had to cut production of its vehicles, not just the Mach E but the F-150, Bronco, Explorer SUVs and the Lincoln Aviator SUV.

With these wait times in mind, when can you buy your Mach E?

Ford says it is continuing to “maximize production” because it’s committed to delivering high-quality vehicles that are high in demand. The chip shortage is somewhat improving, so you could expect shorter wait times as the year progresses. If you already have the budget and the model picked out, now could be a good time to place your 2022 Ford Mustang Mach E order.

An EV purchase differs from your typical car purchase; traditional cars are typically bought from dealerships, with key holidays driving better prices for buyers. EVs like Ford’s Mach E are made to order; these eco-friendly rides are built when your order comes in

So the manufacturer can get right to building it.

But if you don’t have the budget yet and are still strategizing to save up for that first car, you can buy when you’ve reached the right amount.

Not Just the Mustang Mach E

The Mustang Mach E isn’t Ford’s first foray into electric vehicle territory. Henry Ford toyed with the idea in 1914 — way ahead of the competition. Time magazine even ran a story on it with Ford confirming the experimental manufacture of electric automobiles, adding that the primary issue has been building a lightweight battery storage.

At some point, Ford worked with Thomas Edison on the electric vehicle. But the collaboration fell apart after Ford’s $1.5 million investment in the project and 100,000 batteries.

Today, the automaker is investing $11 billion to manufacture 16 fully electric vehicles by 2022. Aside from the Mustang Mach E, the Transit Connect, Ford Escape crossover SUV and Lincoln MKC are also going to be part of automaker’s EV lineup.

Although the Mach E isn’t as impressive as the Tesla models in terms of power and handling, it still is a good introduction to plug-in driving. They’re not as expensive but these Ford Mustang Mach Es will do just fine on the road.

PrevPreviousHow Electric Vehicles Are Taking Over the Industry
NextDon’t Panic, I’m a Mechanic: What Oil Should I Use for a Chevy 350?Next