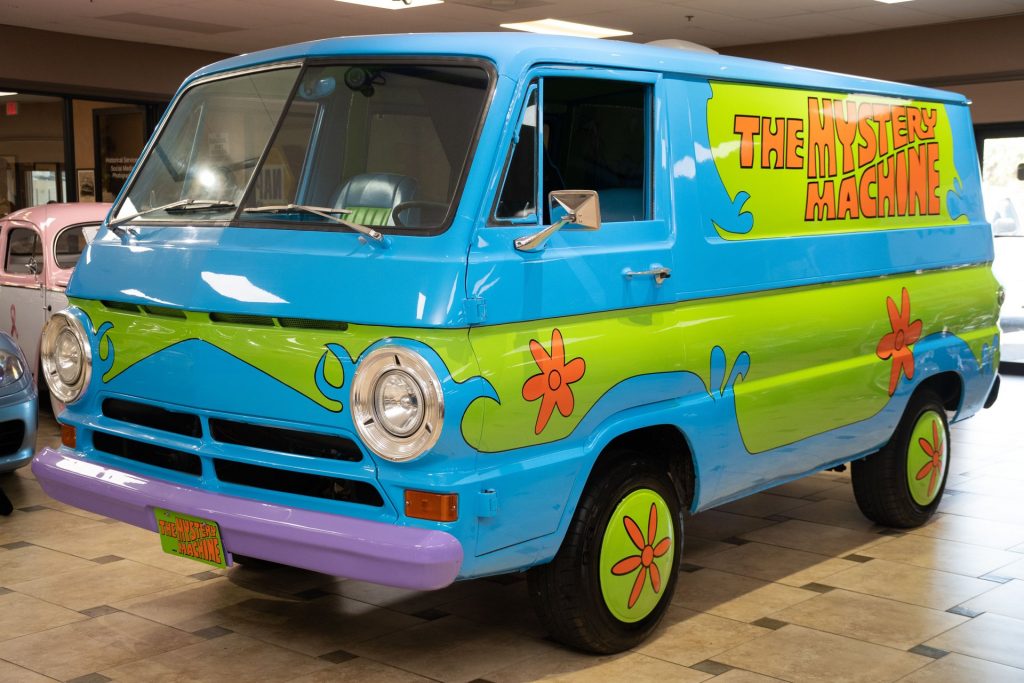 The Scooby Doo Van: What is This Mystery Machine?

Herbie, the Love Bug from “Herbie.” The Ecto-1, a converted 1959 Cadillac from “The Ghostbusters.” And The DeLorean DMC-12, less of a supercar and more of a time machine, from “Back to the Future.” All iconic vehicles from some of the most popular movies of all time are instantly recognizable. If one of those machines ran you over or rear-ended your car, it’d be surprising for the cops not to find it.

One such vehicle that renders itself to easiest eyewitness identification is the Scooby Doo van.

Scooby Doo Van: Where are You Now?

You can’t miss the Scooby gang’s van, with its blue and green paint and orange flowers. But it’s been a few years since the moviegoing public has seen The Mystery Machine, which is what the Scooby van’s called.

The most recent animated series, “Be Cool, Scooby-Doo!” ran in 2018. The most recent live action movie, “Scooby Doo 2: Monsters Unleashed” showed in 2004. Subsequent adaptations from the cartoon have been spinoffs and direct-to-video releases.

But if you’re a big fan and want to get behind the Scooby van, you have two options:

One recently sold in North Carolina. Posted on Facebook’s marketplace, The Mystery Machine is a transformed 1966 Ford Econoline and sold at $10,000. A veteran customized his Ford van to look like the iconic van from the animated series as a way to cope with his PTSD. When diagnosed with the condition, the owner thought of a fun project and went with riding around his town in the colorful van — complete with a stuffed toy of Scooby peering out the window.

Unfortunately, a medical condition prevented the owner from enjoying his custom van. So the Scooby van was put on sale.

Another similar custom van sold in Arizona but for a much steeper price. The 1968 Ford Econoline Mystery Machine van was auctioned off to a winning bid of $59,400. Why the posh price tag?

In comparison to the one from North Carolina, the Arizona van runs on a three-speed automatic transmission. It has a factory 302ci V8 engine. And for every gearhead, the engine matters.

The North Carolina van runs on a column manual shift and has a leaky master cylinder. Some rusting has also developed, so some repairs would be needed. All the deterioration would account for the lower price.

If you can’t find a Mystery Machine lookalike on auto listings, customize one as a project or hire an auto shop specializing in customization of classic cars.

But which make and model should you pick? What kind of van is the Mystery van?

What Type of Car is the Scooby Doo Van?

Plenty of speculations exist online about the make and model of the iconic van. But many agree that it is not a Volkswagen minibus.

One theory is that it’s based on a 1978 Volkswagen LT 40. Other theories point to a Dodge A100, Chevy G-Body van, Chevy Astro or GMC Safari van — and the live action adaptation even has its version: a 1972 Bedford CF.

These classic vans may have been attributed as the Mystery Machine for their similarities in exterior parts. The most notable ones would be the rounded headlights and the shape of the front. And that most resemble a 1960s panel van look.

What do the Hanna-Barbera animation writers and producers say about what type of van the gang drives? Nothing. No official word has come down about the make and model of the mystery solving gang’s official vehicle. So it’s a “mystery” in itself.

But there is a whole history behind this popular van.

Who Owns the Mystery Machine?

The show’s creators may not have come up with technical background of the Scooby Doo van, but it did manage to develop a whole story to how it came to pass.

A band called the Mystery Kids owned the colorful van, which was designed by head hippie and pianist, Flash Flannigan. For whatever reason, Flash sold the flower-tripping vehicle to neckerchief-wearing Fred Jones, who headed the Mystery Inc. (“mystery” must’ve been big in those days) group.

From then on, the blue and green painted van (with the purple trim) served as the official supernatural mystery solving vehicle of Velma, Daphne, Shaggy and Fred — and Scooby.

Drive an Icon, Drive a Classic

Most classic cars have such a unique look to them that they instantly become unforgettable onscreen. So much so that fans scour the web for similar vehicles to restore or customize.

Although you don’t have to stick to the full-on design of a Scooby van, from installing a satellite dish to rigging the interior with tracking devices, you can stay true to the exterior look.

Of course, if you’re going around town in a conspicuous van, follow the traffic rules and drive safely. Everyone’s going to remember a big, blue and green van with orange flowers if you decide to drive away from rear-ending someone’s car.