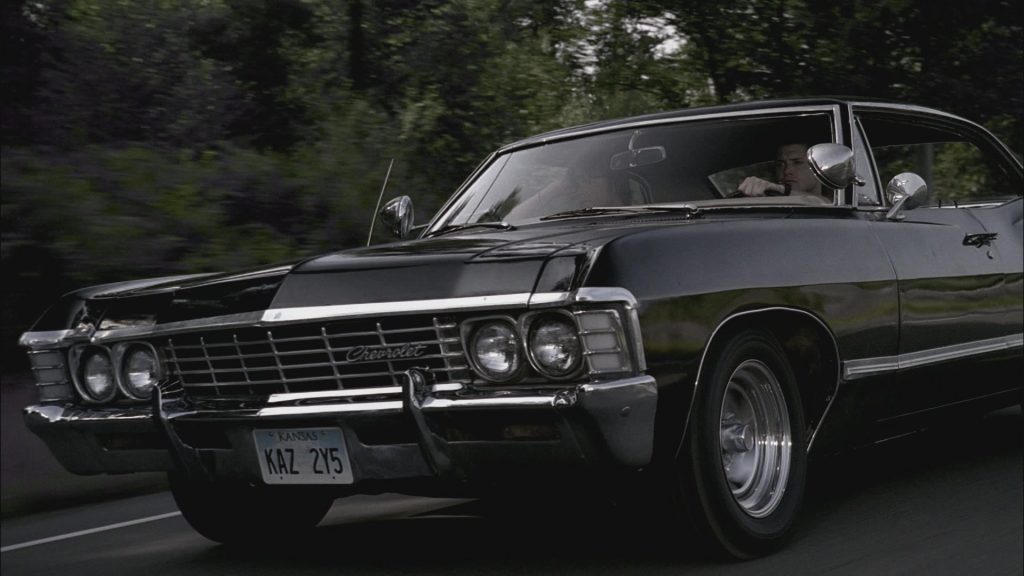 The Impala: How a ’67 Classic Became a Pop-Culture Icon

It’s one of the most iconic characters in pop-culture today, and has helped shape the classic car industry over the past decade. From one of the most understated and least appreciated muscle car to becoming many a collector’s holy grail, the 1967 Chevrolet Impala is a gorgeous, iconic, and powerful machine which, thanks to the show Supernatural, elevated it from being underappreciated to deified.

But first, a bit of history…

The Impala is a model of full-sized car developed and manufactured by the Chevrolet company. Chevrolet produced Impalas from 1958 to 1985, then from the 1994 to 1996, before finally reviving it completely and making it a permanent member of their product line starting in 2000. The Impala is Chevrolet’s flagship passenger car, and is one of the top selling cars in the country.

At its debut in 1958, the Impala stood our from the competition with its symmetrical triple taillights, a design aesthetic not previously used by Chevrolet. The Impala was also the parent brand of the Chevy Caprice, which was introduced in 1965 as a top-line Impala sport sedan, later becoming a brand of its own in 1966.

Despite being below the Caprice in Chevy’s series line, the Impala remained one of the most popular passenger cars all throughout the 1980’s. After production was paused in 1985, it started again in 1994, where Chevy gave the Impala a new aesthetic modeled after the Chevy Caprice Classic sedan (along with a more powerful 5.7 liter V8 engine).

Production was paused again in 1996, but would resume in 2000, where the Impala was reintroduced as a mainstream front-wheel drive vehicle. Since then, it’s become one of the country’s most sought-after affordable large cars.  The 9th gen iteration of the Impala was rebranded as the Impala Limited, where it was sold exclusively to fleet customers until 2016. By its 10th gen iteration in 2014, it had become of the world’s leading car brands in terms of functionality and affordability. The current generation of Impala is sold only in select countries outside of the U.S.: Canada, the Middle East, China, and South Korea.

Throughout the hit show Supernatural, Dean drives a black 1967 Chevy Impala, which he affectionately calls “Baby”. It was passed down to him by his father John Winchester and is one of his most prized possessions. As the Winchester brother’s main mode of transportation/weapons vault, the Impala is an integral part of their profession of hunting down monsters and other supernatural beings.

The trunk of the Winchester’s Impala is chock-full of  various types of weaponry for different types of monsters, as well as fake identification documents, change of clothes, and other things Hunters like them might need.

Supernatural’s Impala used a Kansas license plate for the first 2 seasons (KAZ 2Y5), a reference to the main character’s home state of Kansas and a reference to the show’s premier date. By the end of the second season, the Winchester brothers are on the run from the FBI, prompting them to switch to an Ohio plate (CNK 80Q3).

In Supernatural: Origins, the shows comic prequel mini-series , the origins of the Impala are depicted, with John Winchester keeping the car after his wife Mary’s uncle is accidentally killed during a hunt. John feels remorse over what he feels is his fault, and thus takes ownership of the Impala as both a reminder and homage to Mary’s uncle.

However, fans of the show were displeased with this depiction, as they feel it violating the series’ on-air canon (John is seen with the car in the pilot episode of the show. The comics are chronologically set after the pilot).

To remedy this, the showrunners decided to alter the mini-series for its trade paperback to better reflect its origins in the show. Meanwhile, the ‘true’ origins of the Impala were finally revealed in Supernatural’s 4th season, where it’s shown that Dean, after being transported back to the year 1973 by the angel Castiel, convinces a younger version of John Winchester to purchase the Impala over a ’64 VW van. In the finale of season five, it’s revealed to be the 100,000,001th car ever produced by the GM plant in Janesville, Wisconsin.

The TV show uses stock, 4-door, hardtop 1967 Chevrolet Impalas with Chevy small-block engines, custom seats, and recolored interiors. However, none of the models have a functioning radio. The original and first ’67 Impala to be purchased and used in the show, Hero 1, is the one production uses for production photos and any scene that involves just driving around and looking gorgeous. The other Impalas are heavily modified, with detachable roofs and doors to allow cameras to move freely throughout the cars, as well as scrap cars that they can use whenever they show the Impala being damaged.

What Sets it Apart

Aside from the fact that the Winchester’s made their ’67 Impala their de facto home, let’s look at the other things that make that car special in its own right:

The ’67 Impala features bench seating up front, with a stock cassette deck and a line-lock that allows for beautiful front-brake burnouts. It has a sizable trunk, which the Winchester’s brothers have modified with demon trap sigils and crammed it to the 9s with their monster hunting equipment and doodads.

It stands at just around 18 feet, and powered by a hefty 502-cubic inch big-block engine, bolted down on a custom-built Hotchkiss performance suspension. As mentioned, the show uses multiple Impalas, seven of them, in fact, for various shots and scenes. Aside from Hero 1, there’s also Buck, which is an Impala that is designed to be modular so parts can be removed whenever necessary, usually so that production can stick a big camera in there. Buck was the car of choice for moving shots from the series premiere in 2005 up until around 2010-2011, when modern camera tech caught up and allowed for smaller cameras to be built. Since then, the crew has since ‘retired’ Buck, where he’s enjoying a semi-retirement in the studio’s garage, wheeled out only when necessary.

The 1967 Chevy Impala is one of the rarest models of Impala out there, not just because people didn’t value it during it’s hey-day, but because modern classic car culture dictated that 4-door classics were ‘less’ aesthetically pleasing than 2-door versions. Thanks to Supernatural, however, appreciation of 4-door classics is on the rise, with used ’67 Impalas now going on sale for upwards $20k and up.

However, custom builders in Kansas can whip one up for you for a cool $40,000. But hey, at least it’s from the Winchester’s hometown.