Two cycle engines made their first crude debut in the 1880’s and required many additional years to become the basis of today’s 2 cycle design. With the invention and resulting patents for the four cycle design in the late 1860’s, the two cycle design was one method designers used in order to ‘sidestep’ these patents and still produce a usable engine.

Also, many engineers at the time felt that there must have been other workable designs, besides that of the four cycle, from which power could be generated. The two cycle operation and design was generally simpler, requiring fewer parts, and thus lowered costs and maintenance. One fault these engines many times do have, however, is that they can be hard to start. Just ask someone who owns one!

A good majority of the early stationary engines using the 4 cycle design, used a method of speed control which involved the exhaust valve mechanism. Engine speed is sensed, usually, by a fly ball type of governor, similar to those used on early steam engines. As engine speed increases to a preset level, the governor mechanism engages some type of latch mechanism to hold the exhaust valve open, regardless of the exhaust cam position. With the exhaust open, the engine is unable to draw a fresh gas/air charge into the cylinder during the intake stroke, nor is it able to compress the mixture during the compression stroke. Thus, nothing is present to provide power during the following power stroke and the engine simply ‘free wheels’ as long as the engine RPM is up and the governor latch in activated. 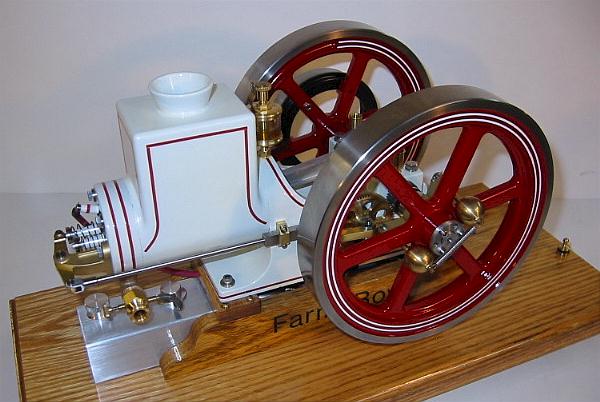 Finally, when the engine speed drops sufficiently, the governor releases the exhaust valve and the engine resumes its normal four cycle operation. Again, if the speed increases to the preset level, the engine returns to its free wheeling state. This attributes to the occasional “Hit” when the engine fires and the “Miss” the remainder of the time. The sound produced is a occasional pop during firing and a basic ‘panting’ through the exhaust pipe while the engine free wheels. Since these engines generally turn 500 RPM or less, the sound made is very unique. As the work load is increased, the engine will fire more often to maintain speed, to the point when enough of a load will cause the engine to fire every time like a modern throttled engine.
Go to the shed for a look

Much like todays’ predecessor to the current fuel injected engines, these engines used a throttle valve between the carburetor and the engines intake. This throttle is connected to what is commonly a gear driven fly ball type governor. As the engine speed increases, the fly ball mechanism will actuate its attached linkage, which in turn closes the throttle and slows the engine down. Conversely, with low engine speed, the fly ball mechanism will open the throttle and speed the engine up.
1917 Fairbanks-Morse ” Z ” 6 HP
Go to the shed for a look

The Stirling Cycle engine is a very old design dating back to 1816, the brainchild of the Rev. Robert Stirling (1790-1878). The design is simple in its theory, but the mechanics by which this is accomplished can sometimes be a challenge to explain. Suffice it to say that a contained quantity of air in the engines cylinder is repeatedly heated and cooled by being moved from a heat source to a cooling source and back again. Since air expands when heated and contracts when cooled, a usable pressure pulsation in generated which is applied to a piston, connecting rod and eventually a crankshaft in order to produce work. The heating of the air is usually done by a wood, coal or gas stove as part of the engine. Cooling can be accomplished by water as in this example, or by air. The pressures generated by these engines is very low which, compared to steam, makes them very safe, which was the reason why the Rev. Stirling took on the task of engineering such an engine. However, these low pressures translates into a low horse power output, which eventually contributed to the demise of these engines, even though many where built prior to 1900. It is interesting to note that there is a reserging interest in the Stirling cycle theory and many modern engineers are looking, once again, at the Stirlings potential.

Go to the shed for a look

Does the name Rudolph Diesel (1858-1913) sound familiar? Though the first name might be new to you, most everyone has heard of the name Diesel, be it the type of fuel or the type of engine. Diesel was to become the father of the true “compression ignition” engine and successfully built a running prototype in 1894. Many problems plagued Diesel’s progress until around 1897, when a truly workable engine was successfully tested. It used the same four cycle design, but made use of the extremely high temperatures created when air is highly compressed during the compression stroke. The fuel is injected into the cylinder just as the pressure/temperature have peaked in the combustion chamber causing the fuel to ignite without any external source of ignition.
At present there are no longer any Diesel engines in the shed.
Go to the shed for a look

Most antique engine collectors have the same “bug” about their hobby as anyone else has about theirs; find and collect anything related to the subject. Some of us in the ‘engine business’ tend to take this a bit closer to heart than others when it comes to model engines. Many manufactured models exist today that are beautiful representations of the real thing. But they lack one thing. They don’t actually run! Well, that problem has been resolved by some of us backyard machinists and some very unique casting kits available over the past several decades. We just build our own engine! Not just put it together, but do all the machining, painting, finishing as well as assembly. The result is something you can really call your own!
Go to the shed for a look

Every so often, something pops up that nobody knows anything about or has never seen before. The same is true with antique and vintage engines. Sometimes due to a short manufacturing run, corporate problems or an unpopular or weak design, these power units have all but faded into history, while on a rare occasion one will surface and create more questions than answers. A particular engine in the shed is just such a case.
Go to the shed for a look
Scroll to Top
Go to mobile version